Winter in Prague: A Touch of Mink entwined in a Post-Medieval city whose beer-putation is becoming stronger than its classical foundations

Walking through Prague’s airport, I could immediately tell that this location would be a far different experience than my trips thus far. The building is stark white and mostly glass, and looking out beyond the floor to ceiling windows, I saw nothing but flat, barren terrain, and lots of it. It felt as if we had landed in the middle of Dr. Evil’s secret layer. A cab drove my group into the city center, where the emptiness was replaced with multi-colored buildings, tram tracks, and centuries-old architecture.

February is a brisk month in Prague, but the Czechs make the cold look chic. Coming from Italy and never having been farther east than Rome, the city struck me as having a strong Eastern European flavor. The clothing and style were vastly different than the casual southern Italian flair I had grown accustomed to encountering on the streets of Roma, and while I was bundled up in at least seven layers, topped off with my puffy Postcard jacket, the people of Prague made the dreadful winter chill more fashionable than the pages of my glossy magazines back home in New York.

For our first evening in Prague, I asked our concierge to suggest a classic Czech restaurant. Hidden in a deafeningly quiet neighborhood in the old town, we very nearly missed U Modre Kachnicky I, a classic, old-world restaurant. Moving aside the heavy curtains upon entering, we were greeted by an older gentleman dressed in a uniform of white and black and an older gentleman playing a concerto on the centuries old piano. The ambience was nearly spooky. Our group of six was escorted to another room towards the back of the establishment, filled with old trinkets, tall antique chairs and draped tables. I revelled in the party dining next to our table, two couples speaking in a language I could not quite recognize, dressed to the nines and talking over numerous glasses of dark alcohol. The women casually lay their white mink and rabbit scarves and accessories on the table, the men their watch fobs. They were so effortlessly chic and incredibly wordly, I could barely focus on the fine Czech menu options. Their Austrian/Russian vibe made me giddy in my straight-backed chair.

Feeling festive and thus adventurous, I ordered something new and difference: rabbit. Please forgive me for dining on this small, innocent creature, and forgive me further for saying the following: it was delicious. Dare I say… it almost tastes like chicken. The restaurant’s specialty is duck. There are also a few vegetarian dishes. 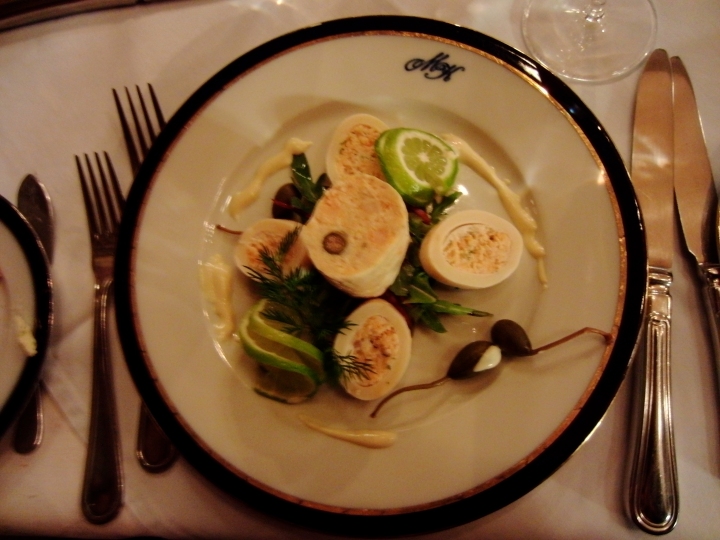 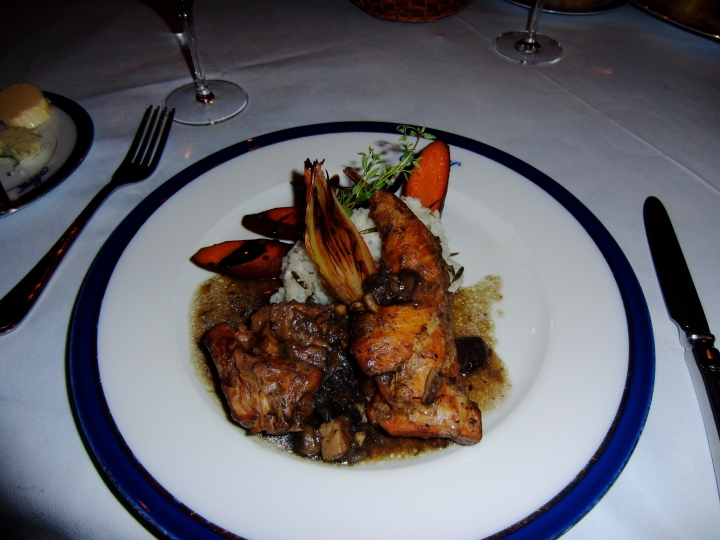 My first ever rabbit dish at U Modre Kachnicky I

I had heard from so many people how Prague is a beautiful city, one of the most stunning in all of Europe. Perhaps it is because my visit took place during the last three days of frigid February and not in the blooming spring or summer season, but it’s winter asthetics left at least a small bit to be desired. The city scape is indeed picturesque, even in the gray, but the city itself felt very touristy. In fact, it was hard to differentiate the tourist areas from the residential or ‘local’ areas. As a traveler who seeks out the local neighborhoods as opposed to the more touristy spots, I was confounded with how few and far between these neighborhoods were. Prague nearly felt like one tourist jumble of a city, some of it almost Disneyland-like with its castles and multi-colored structures lined up with trinket stores and Times Square-esque knick knacks. My favorite area, if I had to choose, would be the Mala Strana, where baroque buildings have a movie-set ambience. In the center of the Stare Mesto is the Old Town Square, dating back to the middle ages. This is the tourist center of Prague, where crowds convene around the astronomical clock tower. This area is especially pretty at night, when the lights illuminate the warm-colored buildings and the square literally glows. It has a fairytale-like feel, as does the vista from the Palace, high above the city center.

I did, however, manage to find a few great lunch places with quality food, reminescent of stateside eateries. I think it is because these lunch cafes are non-existent in Rome that I was overly excited to find a casually chic lunch spot where I could order a variety of salads or ready made options from behind a glass display case. This may sound strange, as we have so much of this here in the states, but move to southern Italy and you will realize my frustrations with the light-lunch limitations. A few fantastic cafes and bakeries can be found right around the corner from Prague Castle. This is a higher-end neighborhood, and all of the fantastically expensive stores are within walking distance (Prada, Gucci, Louis Vuitton…etc.), so quality food and patisseries are numerous. I was dumbfounded with how omnipresent the cakes and pastries are. Their presence and appreciation makes sense, however, as Prague’s culture is very similar to Vienna, whose cafe culture is still very much in tact.

What I was most taken aback by was how many people were casually eating these giant slices of decadent cakes, at all times of day, perhaps after a sandwich or perhaps just as a mid-morning snack. New Yorkers love their sweets and we absolutely appreciate well-made desserts, but those judgmental eyes are everywhere in my home city. To sit down with a piece of cake the size of my hand and dig in guilt-free is almost a sin in Manhattan. It is frowned upon indefinitely, whereas in Prague, those feelings of guilt, remorse, or ‘No, I really shouldn’t’ were nowhere to be found. And not one of these dessert loving Pragians were overweight.

Self service basket bakery in Praha

If you are on a budget, there are certainly ways to enjoy the local flavors in Prague. The city is actually known for its inexpensive pubs and great beer, thus attracting large amounts of students and young foreigners. On a narrow cobblestoned street behind the clock tower is the tiniest of bread shops with a successful system that gets customers in and out. Pick up a basket at the end of the line and take whatever you like from the choices of breads, pretzels, and pastries before you get to the cash register. 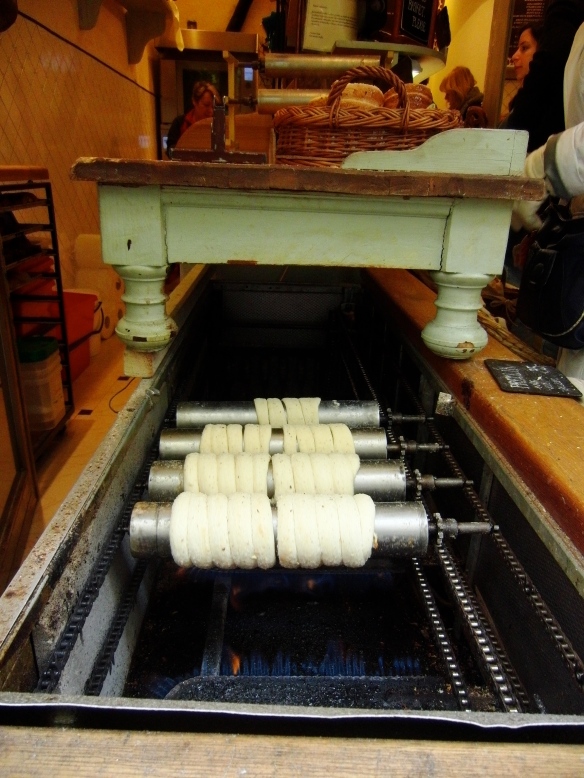 The bakers wrap the dough around these moving ovens lickety split, and by the time you get through the short line, just-made, divinely smelling pretzels are ready to go.

I would suggest planning your trip to Prague in any season besides the winter, so as to appreciate the deep colors of the city… the orange rooftops, the multi-colored houses and shops, and the beautiful landscaping around the river. There are numerous restaurants of every style and cuisine, from modern to old-world, from Thai to Vegan to classic Czech. I would certainly suggest attending an opera and going on one of the bus tours which was a very handy way of taking in the various architecture throughout the city. This a a very historic city, and it is worth hiring a guide to learn the stories behind the buildings and the ruling families. If you can afford it, stay at the Mandarin Oriental or the Four Seasons. The Mandarin Oriental is located in the Mala Strana, away from the very touristy, congested center, and it has an almost spooky, Russia-meets-Austria ambience. Privately tucked away behind large gates in a cobbled-stoned courtyard, one gets the feeling that they are truly royalty in this historic setting. It is housed in a former monastery, and it exudes a peaceful quietness throughout. I took it upon myself to wander around the restaurant and spa area. Absolutely take advantage of the contagious tranquility by booking yourself a few spa appointments at this beautiful sanctuary. Built in a former renaissance chapel, you feel as if you’ve literally white-washed your racing mind and stresses once stepping into the triple height ceiling reception room. It is a worldly place where you will encounter visitors from all areas of the world speaking all languages. The Four Seasons is located on the other side of the river from the Mandarin, in a busier more transient neighborhood. It sits directly on the river so the views are incredible, but I would not say it captures the essence of the city as well as the Mandarin. If you do not want any surprises, go with the Four Seasons, as it never disappoints. 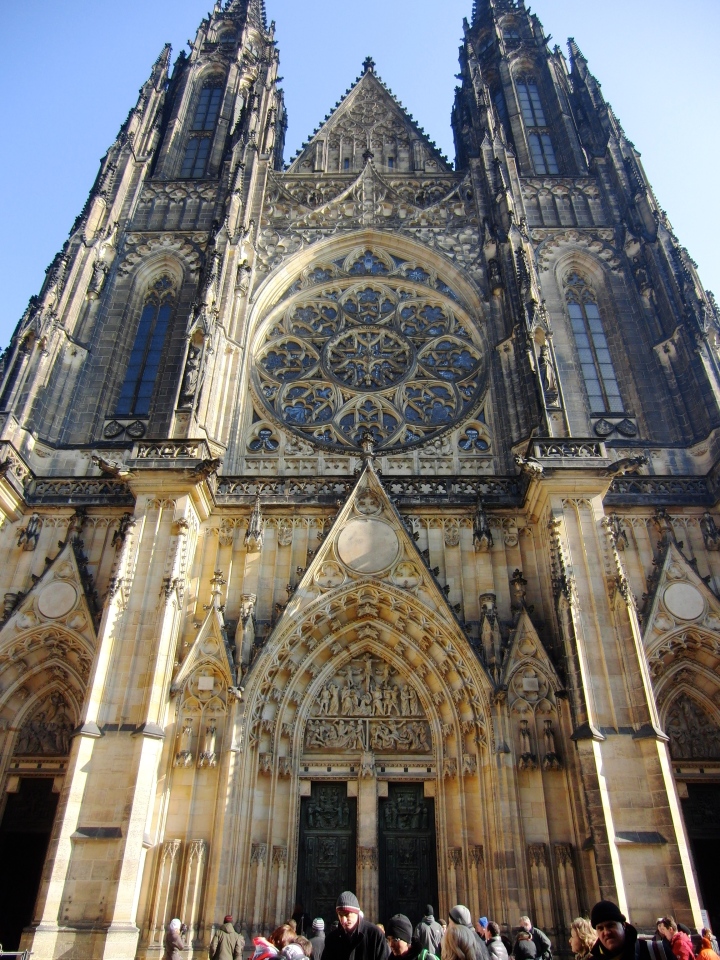