One of the modern hospitality businesses greatest challenges is transcending the intangible elements of a property to people who have yet to experience it. How does a hotel or an inn or a resort send wavelengths of ambiance, of the subtle scents, of the discreet service, of the warmth of its people, of the incredible freshness of its herbs? How about that sensation you have at 5pm after a beautiful day well-spent, langouring in the evening light and allowing yourself to be hypnotized by the gentle swish of the olive trees?

Masseria Potenti is one of the rare properties that is able to transcend the emotions of its property via our generation’s most used and addicting social medium. Via instagram, Chiara, Maria Grazia’s daughter, writes beautiful verse about what to her is a quotidian day: picking wild flowers in their acres of Puglian fields near the western coast, creating wreaths of dried peppers, hanging fresh figs to dry in the breeze, rearranging Puglian ceramics in the dining room, creating a surreal environment for one of the 3 or 4 dozen weddings they host each summer, picking pomegranates from the nearby pomegranate trees, hoarding crates and crates of local tomatoes home for Sunday lunch for the guests… all of these activities written in the poetic hand of a gifted writer, someone who not only can create the intangible, but can invite you into it from afar, wrap you in a web of love, and capture your heart just so, so that you plan your entire Italian adventure around a visit to this enchanting Masseria.

I arrived on an unusually windy day. My flight from Milan was delayed on account of the unseasonable wind, a gust of weather that southern Italians are not quite accustomed to. After meandering my rental car through fields of olive trees and literally across one or two vineyards (which in hindsight I think was actually a mistake; I do not think I was meant to be off-roading in tractor tracks), I finally made it to the slightly hidden entrance of Masseria Potenti, announced by its tall white columns on an otherwise quiet, dusty, country road. I entered the iron gate of the property, enclosing myself in what I would quickly realize were white walls of supreme serenity, and listened to the echo of the door in the slamming wind as I crossed the expansive courtyard area. I felt quite like I had entered another universe, especially with the mesmerizing sheets tied to white arbors billowing in the wind.

While it meant we were all a bit dusty, I secretly loved the gusts for creating this romantic, cozy effect on the property. I sealed myself into my suite, awash in white stone, soft, homemade linens (of which Masseria Potenti is quite an expert; you will find armoires and armoires of linens all over the property), a typically tiled shower with a vintage copper head, double sinks cut out of rustic Puglian stone, and the hand of an atmosphere connosier, who had carefully selected local ceramics to adorn the space just so. In this Goldilocks world, I also had freshly cut flours and three local quilts tucked away in case I got chilly at night. The suite was as darling as could be, and I would gladly choose it again, especially for its approach under an arbor of white Puglian grapes, the sun dappling through the vines overhead.

I was a little late for the lunch hour, but the lovely team set me a place at the gorgeous, oversized dining room swathed in afternoon sunshine. I admired the armoires filled with ceramics and glasses, each of them patiently waiting to be filled with pot of orecchiette or an armful of wild flowers, and there I enjoyed a divine yet ever so simple plate of fresh fish and sautéed vegetables from the garden, drizzled with a local grassy, green olive oil that I couldn’t get enough of. 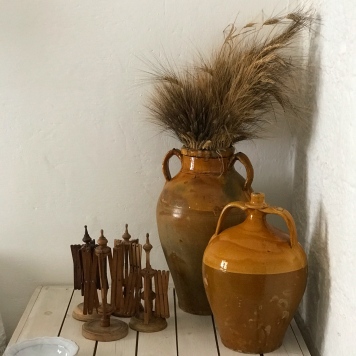 Details in my suite

Mid-afternoon light in the dining room 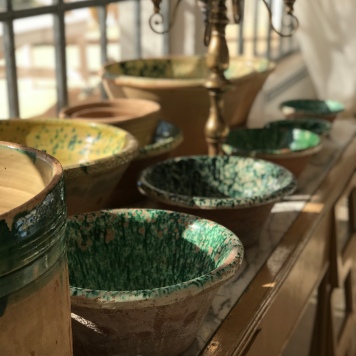 Everything just naturally in place 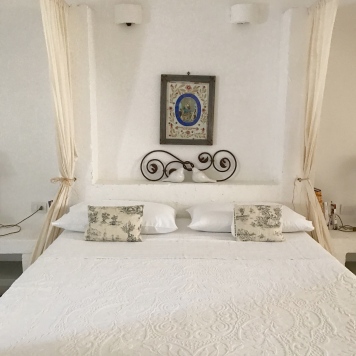 My delicious bed (memory foam mattress to be remembered most fondly) 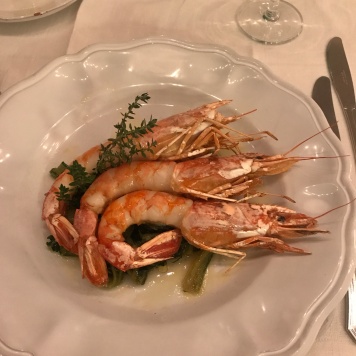 Shrimp with sautéed greens from the garden at Masseria Potenti. The greens underneath were fiery with spice and full of flavor. This was one of my best dishes of the trip. 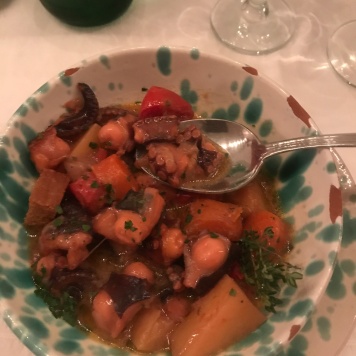 From Masseria Potenti, you are always about 45 minutes to an hour away from somewhere worth visiting. Since the wind eliminated the possibility of a late September dip in the sea, I ventured towards La Città Bianca, also known as Ostuni. A tiny little town slanted on a hill overlooking the eastern coast of Italy’s boot, it is awash in Puglian white stone and dotted with vibrant accents in the form of a turquoise door, one single cactus plant as a doorpost decoration, and nonchalant magenta bougainvillea offering arcs of shade as you wind your way through the narrow pedestrian-only lanes. The ground is slick and shiny, a characteristic that seemed to repeat itself in other Puglian towns, but yet is so vastly different from the dusty, rusticity of the land as you drive from one town to another.

As the town is small and quiet and still a bit touristy in late September, I situated myself on a whitewashed terrace at the edge of the centro storico as I languidly awaited the lunch hour. Looking out to the sea, sun splashing my right cheek, the sound of a little boy playing with his mother inside one of the small apartments behind me (whose windows were no larger than prison cell windows, mind you, even with this beautiful sea spread out before them), I wondered what this whitewashed town was like before the British tour buses found it. Surely everyone knows one another, and grows up together, and plays at the beach together, and knows this labyrinthine maze of narrow lanes like the back of their hand. They know who has the best view of the Valle d’Itria countryside and who has the best view of the Adriatic Sea. They know who sits in which row inside the breathtakingly magnificent Basilica di Santa Maria Assunta, Ostuni’s gothic-style cathedral. They could probably each lead a tour group on the incredibly chiseled centrale rose on its exterior, a mix of Roman, Gothic, and Byzantine elements. In fact, if you are going to hire a guide for anything at all in this photogenic town, I would suggest one for this cathedral. It is a wonder, to say the least, and the Italians agree. It was declared a National Monument in 1902. 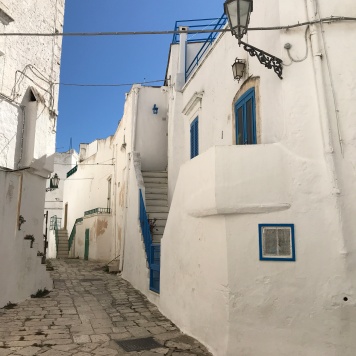 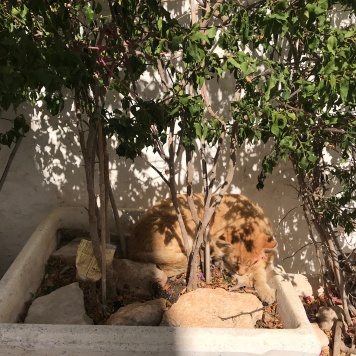 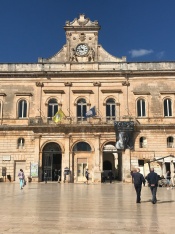 Ostuni’s City Hall sits atop one of the main piazzas, the ground before it as shiny as a marble dance floor.

The view from one edge of the medieval walled city 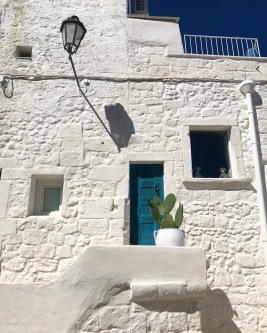 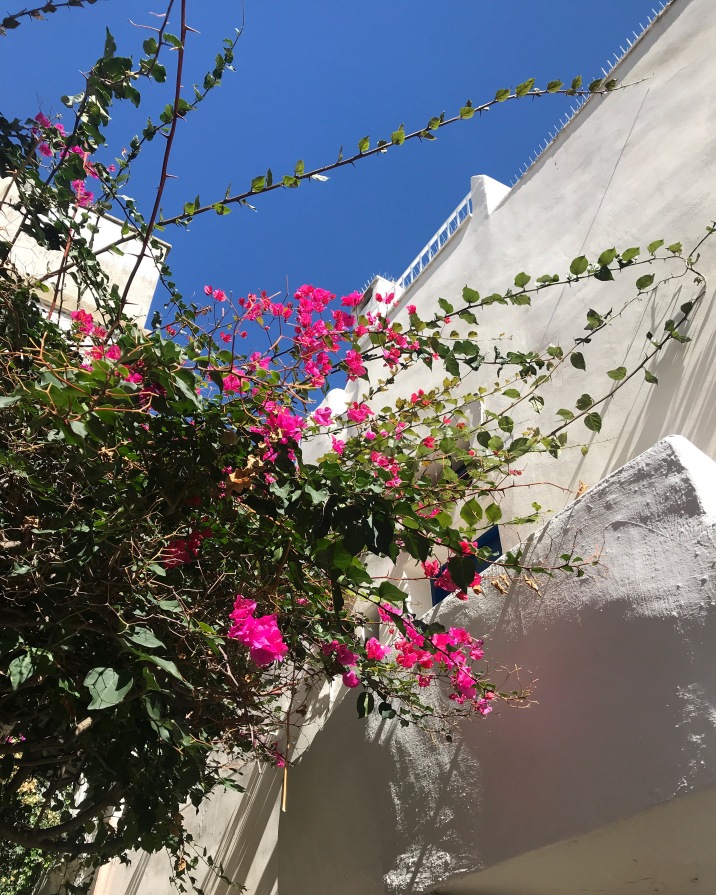 The colors of Ostuni

Lunch was at Osteria del Tempo Perso, an entirely stone, cavelike dining room dotted with colorful vintage Puglian ceramics. Have I mentioned that Puglia has been steeped in ceramics for centuries and centuries? Grottaglie is the most widely known and the most densely populated with traditional ceramic workshops; it is literally a village with hundreds of ceramic artisans. Osteria del Tempo Perso took full advantage of the creative and colorful products of its region with a wide array of plates at each table. I loved every moment, in fact I was almost more excited to see the different ceramics than to taste the very simple and typical Puglian dishes.

After lunch, I made my way back towards Masseria Potenti to enjoy a lazy afternoon on the property. In the few hours that I had been gone, there were already different pots of flowers set on the breakfast tables, different vases scattered in an eclectic, ‘not thinking about it too much’ style on the various tables in the various sitting areas outside, a colorful blanket nonchalantly thrown on one of the daybeds just outside of the kitchen, where I could hear the sounds and smell the scents of dinner prep. It is a scene of perfect imperfection everywhere one looks; the definition of beguiling… ambiance in spades. 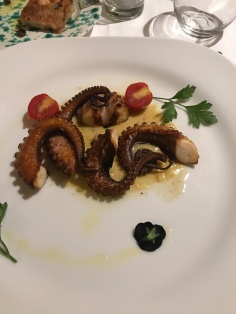 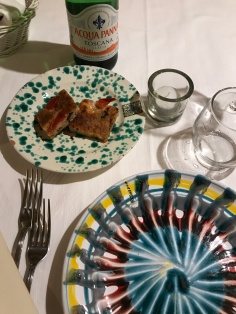 Part Two of my Puglian adventures are Coming Soon…

Un giro with Alessandro Fabrini, A Roman in Manhattan