Marzio’s Firenze: In his own words, Four Seasons’ Esteemed Concierge Shares his Florence and Tuscany

Marzio Fanti is an extremely elegant, expert concierge at the Four Seasons Firenze. His incredible knowledge and enthusiasm is reason enough to stay at the exquisite hotel. This is Marzio’s Firenze, in his own words.

In the mornings, many Fiorentini like to jog at the Parco delle Cascine, which is about 2 miles long and follows the river Arno. Those who are very fit prefer to run along the river for their warm-up, and then, from Piazza Ferrucci, head uphill to the Piazzale Michelangelo, where they are rewarded with a spectacular view. I might join them after a late night of wild boar and salami, but otherwise, you will find me at one of my local cafes.

An ideal spot for un caffé is Caffe degli Artigiani, a simple place located in one of the most authentic squares on the Oltrarno, or ChiaroScuro in Via del Corso which has a great selection of coffee. My personal favorite is the Guibbe Rosse. It was the meeting point of all of the artists at the end of the 19th century until the beginning of the first world war. The walls are covered in poems and drawings made on paper cloths by many artists. You might say that Futurism was born there.

On Tuesdays, I like to go to the Mercato delle Cascine. Here they have hundreds of stalls selling everything from food and sandwiches (panino al lampredotto is a must!) to clothes, shoes, bags, etc. The stalls are lined up on both sides of Viale Licoln, about one mile long. Another great food market is Sant’Ambrogio, which is less than a ten minute walk from the Four Seasons. Here you will find farm carts that have driven in from the hills of our countryside.

If I am yearning for a drive outside of the city, I head to Artimino, just 30 minutes from the center. In the summertime, just inside the antique town gate, there is a delicious ice cream shop. There is also a local Circolo MCL (similar to a snack bar, but it belongs to the church) where a very small elderly lady makes, upon request, a variety of sandwiches with a great selection of local cold cuts- salami, prosciutto, cheeses, etc. A great selection of beers are always available. Having one of those sandwiches sitting in the garden under the trees is just heaven. There are also a few small trattorias in Artimino, such as La Delfina, which has a beautiful view.

There are so many wonderful small villages just a stone’s throw from Florence. A few of my favorite Tuscan towns are Montefioralle, Volpaia, Pitigliano, Pienza, San Galgano, and Bagno Vignoni, famous for its hot springs. I also appreciate the more famous ones like Monteriggioni, San Gimignano, and Montepulciano. As far as Tuscan restaurants go, I like Trattoria Sanesi in Lastra a Signa, Arnolfo in Colle Val d’Elsa, Sor Paolo in San Casciano, and La Fattoria in Tavernelle. 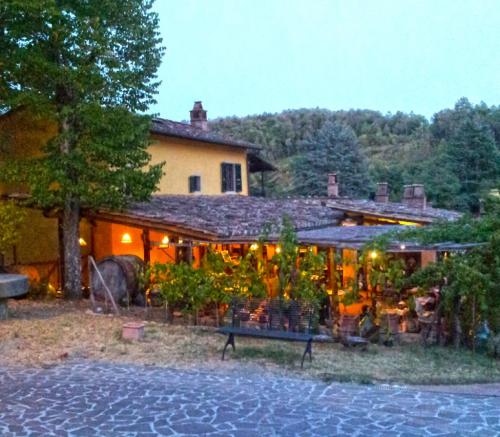 The Abbey of San Galgano

Volpaia is a small fortified village in the Chianti region of Tuscany with panoramic views of surrounding vineyards and forests. It is the hometown of della Volpaia, a very old clockmaker.

Arnolfo Ristorante in Colle di Val d’Elsa is an elegant Relais & Chateaux property with a terrace surrounded by rolling hills and cypresses. Chef Gaetano Trovato trained with a few of Europe’s most notable chefs.

In the dead of summer, Fiorentini like to take their vacation on Isola d’Elba, Castiglione della Pescaia, or Baratti, the Caribbean of Toscana. If they can’t get as far as the beach, they might go up to Fiesole above Florence. On a hot summer evening in Fiesole, I walk to the Convento di San Francesco where it is cool and refreshing, and I can enjoy a breathtaking view of Florence and the countryside. On the other side of the Arno, you will find my favorite place for an outdoor meal in the warm weather: Omero in Pian de Giullari. It is situated on a hill beyond Piazzale Michelangelo right in front of Galileo Galilei’s home. There is a very nice view of the countryside and Florence in the distance, yet it is only a 12 minute cab ride from the center. Once in a while in the warm weather, I rise early, around 5am, for a walk around the city centre of Florence. The roads are empty, and the sensation of walking in the area between the Duomo and Piazza della’Signoria is incredible. There are so few times when you will find it so peaceful and barren.

Castiglione della Pescaia, an ancient seaside town in Grosseto with views of nearby Elba and Giglio.

The Gulf of Baratti is sometimes called the Caribbean of Tuscany. It lay between the Tyrrhenian and Ligurian seas, and while it is especially popular for its beach and pine forest, it is equally renowned for the archeological remains in nearby Populonia, an ancient Etruscan town. 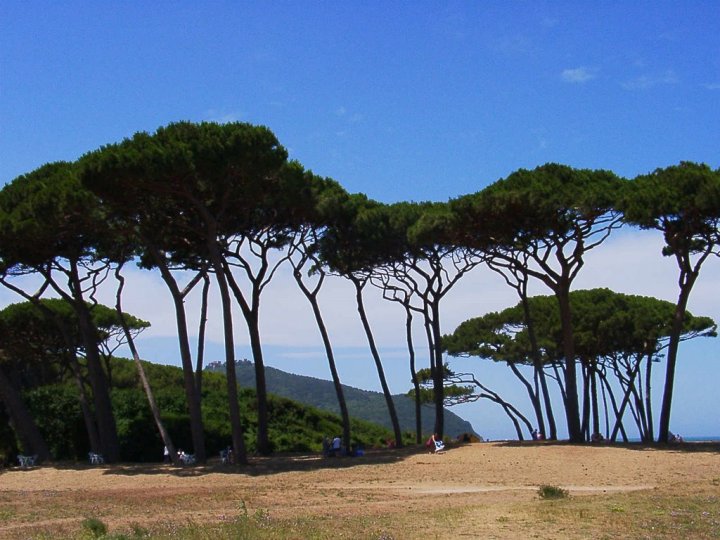 With the changing seasons, the Fiorentini like to update the wardrobe. For men’s clothes, Sartoria Marino is considered one of the premium and most exclusive tailors of Florence. Sartoria Rossi (made in Arezzo) is another very good one. I personally get my suits at Confezioni Santini, which is excellent quality at a fair price. Once you choose your suit, their tailor will take your measurements and in just one week they will have it perfectly adjusted.

The Fiorentini cherish the Autumn because it means that many of our favorite foods are in season again. We wait for several things like the new olive oil, the new wine (Novello), white truffles, and of course, la schiacciata con l’uva. We even have an annual gala dinner at the Four Seasons, celebrating the white truffle and great red wines. 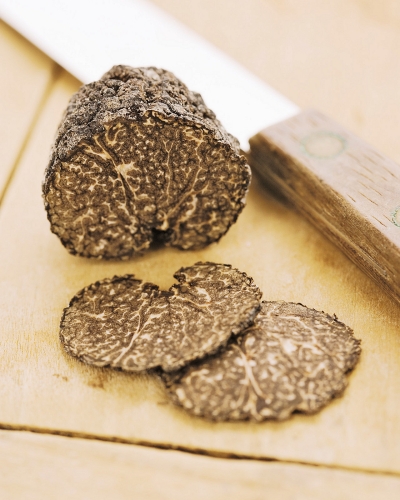 In Firenze, we eat a lot of meat, especially in the cold weather. There are, however, a few restaurants where we find good fish, no matter the season. Cestello is an example of a more modern fish restaurant. I prefer it in summer when I can dine on the terrace. There is also Fuor d’Acqua, where I never use the menu but rather I let the waiters bring me a selection of cold and warm starters followed by the fresh fish of the day. Actually, a short walk from the Four Seasons, you can find Toshi at Iyo Iyo. He is a Japanese Florentine that prepares fresh sushi and Japanese dishes. It has only five tables and no service, and there is a long wait, but it is worth it.

In the thick of winter, I like to go to Florence Hemingway in the Oltrarno, a local small café specializing in chocolates, pastries, and drinks. For a beautiful winter drive, we go North of Florence, where there is a small mountain called Monte Morelle. Here there is a small café/restaurant called Ristorante Consigli. When it is very cold outside and the ground is white with snow, you will find an open fire burning, giving you the feeling that you are in the Alps or Dolomites. The food is simple and good.

When Spring begins to bloom again, I like to go to la Grotta del Buontalenti in Boboli, because not only is it historical, it is a very romantic place. When I was a small child, I used to like the long walkway lined with trees that form a natural tunnel. It runs next to the main path that ends at the little island where the sculptures match perfectly with the nature and create an incredible harmony. In April, the Bardini gardens is unmatched. The wisteria blossoms creates a natural purple tunnel, and at the end it opens up to a vista of the city centre.

Wisteria lane in the Bardini Gardens 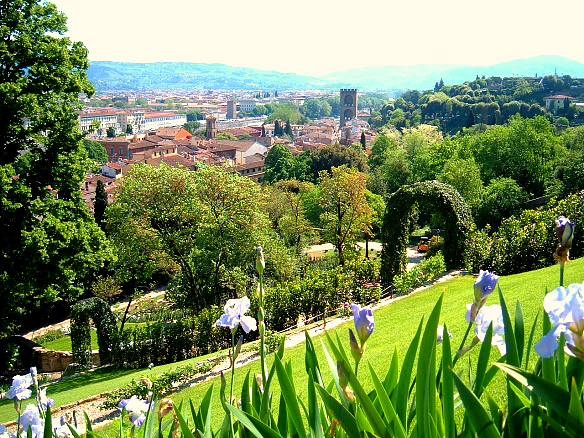 Iris blossoms on the slopes of the Bardini gardens.

After a walk in the giardini, myself and many others like to visit Museo Bardini. It was the showroom of an art merchant in the late XIX century and has an impressive collection of Della Robbias glazed ceramics. There are quite a few interesting museums that many overlook: the Palazzo Medici Riccardi is one of my favorites with La Galleria dei Riccardi and la Cappella dei Magi by Benozzo Gozzoli. Few people are aware that in the summertime, the Uffizi stays open until 10:30pm, so if I want to visit the Uffizi, I wait until late Tuesday nights.

As a person who was born in this great city, I never stop learning about our history and our culture. Florentines are very well-versed and knowledgeable about our city’s history, because we actually live and breathe what we studied at school, so the history stays in our mind. Actually, more than at school, the history and stories about my town have been handed down from generation to generation, from father to son. I like to say: “siamo generazioni di Pane Finocchiona e Rinascimento!” We are surrounded by important buildings, statues, and frescoes. During the Renaissance, Florence was the center of the world- politically, artistically, and economically. Today, we like to say that “Florentines live on past glory.” And it is true, we are very proud of our bella citta.