I have a running joke with a girlfriend about how it is impossible to tell someone in 5 words or less what it is that we actually do, possibly not even 10. This makes introductions and LinkedIn pages rather cloddish and cumbersome. We find great comfort, however, in knowing that we are not alone in our inability to cast a one-liner: “I’m a laywer,” or “I’m a designer.” It seems there is an entire generation of the ‘amazing Technicolor dreamcoats,’ those who prefer not to be force-fit into a single-occupancy box.

Even those who can at least attribute themselves to one professional line prefer not to limit themselves to labels. Take the internationally adored photographer Lorenzo Bringheli, for example, who, at 35, has already had a career that one who plays the ‘assumer’ might think is only attainable after the age of 50. From glossy editorial at the world’s leading fashion magazines to advertising campaigns for premier fashion brands and everything in between, Lorenzo’s talent, honesty, and refusal to define his ‘category’ has not only enabled him to rise to the top but to remain there with a sense of self-contentment and humble confidence rarely found in such a tough business. 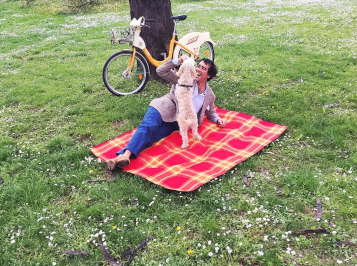 “People try to cage you into a definition which helps them understand how they can hire you, but I am someone who doesn’t have a lot of patience and craves variety. I am a curious person, and so it’s hard for me to put my photography into a certain definition. A positive is that the client doesn’t have to keep changing photographers to get different results.”

He approaches his work first as Lorenzo, with his own personal passions. This means that on his Instagram account you will find photos of whatever subject pleases him at the moment; a homemade lunch at his make-believe trattoria located in his own kitchen, fog on an airport runway, his adorable dog Bruna in the park, the snowcapped mountains in Courmayeur.

“Many of my clients book me because of my Instagram. It’s completely free, whereas the commercial work is someone else’s purpose. That’s why my Instagram has a lot of food, a lot of scenery, etc. My clients see how I can translate many different subjects.” 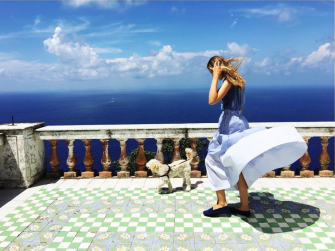 From Lorenzo’s Instagram: The star, the legend, Bruna Bringheli 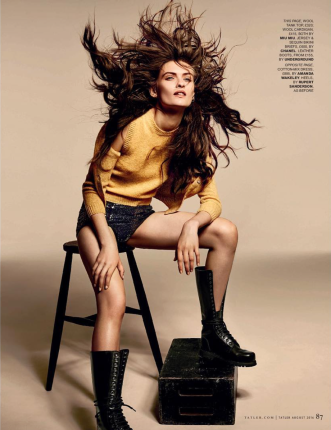 “My approach is usually very direct. When I first started I didn’t want to seem arrogant, but a photographer is asked to give a lot of opinions, and one of the greatest dividing factors between photographers is the opinion that they give. That means you have to develop your opinions and learn how to deliver them comfortably. The more views I give the more I am respected. Being opinionated is a compliment. Good- you have an opinion.”

Surely living in New York for over a decade helped Lorenzo to formulate a perspective and learn how to deliver it without fear. He moved when he was just 22, a testament to his innate courage and determination.

“New York is a really tough city, besides being very expensive. Everyone is there to fight, and that makes it creative and beautiful, but at the same time there is harshness in the souls of people, which I think wasn’t really good for me. I learned so much about being professional, about work ethic and organization. On the other hand, I felt disparate on more than one level. Besides the mental and emotional aspects, I felt visually disparate. I missed the antiquity and the traditions of my country. I was born in Milano, I went to Positano every summer; I missed the aesthetics. I like vintage couches, decadence, old walls… if I buy a house I keep the old. I appreciate the old. When I moved back to Milan, I started to understand more about what I like- what draws me, what I gravitate towards. I got my first iPhone and this changed everything. All of a sudden I had a camera on me that was like a third hand, so I was always taking photos of what inspired me.”

I take a moment to digest this thirty-something man’s incredible wisdom. He is so comfortable where he is, in his career, in his life, in his decision to base himself in Milan as opposed to New York or Paris or London, where so many of his peers live. I wonder if this is a product of his living many lives at such a young age, of being so fearless and moving around, of following his heart and ignoring everyone who told him no, who tried to tell him that they knew better than him, who gave him ill advice. While our generation is admittedly somewhat distracted and multi-taskers to a fault, it does not necessarily mean that we are incapable of finding a balance, both in terms of professional and personal ‘success.’

We exchange a few shared perspectives on the positives of living in Milan, a small cosmopolitan city that offers much in the way of business but not too much of the rat-race.

“Milan is the perfect balance. It’s very elegant. People take care of themselves. They care about how they pull themselves together when they leave the house. I think Italy in general is a really underrated country, so I try to promote the good of Italy. But I would also like to show what is not so good, to show a different side of Italy. There is a lot to say that people are afraid to say.

Beyond the politics, when I’m in Europe I am able to recharge my battery, so that when I arrive in New York I am so much stronger. New York is a city where I don’t recharge. I know that I need to base myself outside of New York so that when I go back I am ready to fight. You never tip the cabbie enough, and he starts swearing at you, and then you’re swearing back at him. I don’t want to be that guy. I want wrinkles growing upwards. I want wrinkles of a serene relaxed person, not the wrinkles New Yorkers have, made out of rage and despite for humanity.”

This might sound a bit strong, but as someone who also fled the five boroughs for brighter Mediterranean pastures, I have to admit, it is not a far cry from the truth. Plus, we have the ability to escape to numerous seaside postcards-come-to-life when we are feeling the slightest bit stressed.

“My mother is from Naples, so my summers were always in Positano. I am sorry to say that the seaside locales in the north of Italy don’t really do much for me. If I can’t go to the south, I try to go near Cinque Terre. In the winter, I like Courmayeur and Valle d’Aosta. I am Airbnb addicted. I like to cook my own food; food has to be made with love, so I rather make it myself.

My dream is to open the window and see only the sea- the Mediterranean sea of course. I’m not planning to get old in Milan. I’d like to spend some time in a happy place. I could possibly live in Paris. Buenos Aires maybe, which I think is between Paris and Naples. They are both warm-hearted, there is a nostalgic feeling, lots of soul, music… this sounds like a happy place.”

Although I know that Lorenzo prefers to be ‘home chef,’ I am always curious to hear his Milan haunts. We dive into one of Italy’s favorite subjects: food.

“I did a lot of juices in New York. I racked up a rather large bill for one of my clients and didn’t realize how expensive they were. But the quality of food here in Milan is not so high and it is hard to compare to Rome, Naples, Catania… in Milan I go out for pizza because there are actually a few great Neapolitan places. Otherwise we go for Chinese food. Al Matarel is real Milanese cuisine, one of the last-standing, genuine Milanese places. La Libera in Via Palermo is where my parents had their wedding party there before the restaurant even existed. The owner (Italo Manca) is 74 and is one of my best friends. That’s home for me. Pietro Lemann’s Joia is outstanding; it was the first Michelin-starred vegetarian restaurant in the world. Being a vegetarian has completely changed my outlook. There’s this bullshit in Italy with tradition. We don’t need to throw it away, but lets go forward and promote a compassionate world in touch with animals, global warming, and other important topics without turning the other way.

Another sensitive topic in Italy: caffe.

“To drink a really good coffee, it has to be a really crowded place, because the machine always has to be working for the coffee to be good. Sometimes I walk near Piazza Lagosta; there is a Sicilian ice cream place and for 1 euro they give you a glass of water, coffee, and a mini cannolo. I go there and drink 2 or 3 coffees. It’s nothing fancy, but it’s worth the little walk.

“I was born in Brera, and I studied in Brera, so that’s my neighborhood, even though it’s changed quite a lot. It used to have more of a rough side with public housing and more artists, although it was always good people, always a nice place to live. Little by little it changed. I moved because it became too touristy, but I am still close Parco Sempione. I bring the dog or take my thoughts for a walk. For me, Milano is around Parco Sempione.”

“Last year I shot a lot for Esquire USA on a worldwide trip: Milan, NY, Hong Kong, Tokyo, Paris, and London in less than 20 days. It was so many different cultures in such a short time. I tried to capture the different vibes of the cities, and it made me realize how powerful globalization is (in making everything similar, flattening many differences). It was challenging to truly differentiate the cities for the readers, but it inspired me to find the hidden corners. I’m a quick traveler, I shoot everything I need to shoot right away, so I don’t need that much time. I shoot my reaction. I don’t like to overthink. NY is so photogenic and the light is great- it’s cold, it’s crisp, but after so many years, I lost my appetite. On this trip, though, when I visited only for 2 days, I shot 10 beautiful photos in the first day, better than some of the photos I took after 10 years of living there.”

I agree that the world is small and getting smaller, but I wonder what Lorenzo would bring back to Italy if he could choose to invite something or someone for permanent residence.

‘Original language movies with Italian subtitles. I wish for people to learn English better. We cannot continue to watch dubbed movies. It’s not the real thing!’