I’ll let you in on un petit secret: if Gilles Pudlowski, renowned restaurant critic, sings a chef’s praises, the restaurant is in all likelihood as good as gold.

The restaurant is small with two separate rooms and a bar big enough for two or three. It’s size enables the lovely owners to engage with their clientele, who over the years have become their friends. Cécile Delabre and Clément Vidalon are as obliging and sincere as can be. Cécile takes your orders and pours the wine, Clément strides in and out of the kitchen to survey and overlook the dining rooms.

A charming presentation of white beans, herbs, and garlic served alongside my white fish.

Do not let the restaurant’s humble interiors fool you, however, as the Chef produces spectacular Basque-inspired dishes on par with Paris’ more well-known restaurants in the city center. Both man and wife have impressive backgrounds: Clément hails from Toulouse’s number one Restaurant Michael Serran and Michelin-starred Eric Frechon in Bristol. Cécile trained at The Mediterranean, in the Palais in Biarritz. So it is no wonder that they draw neighborhood locals and gourmands alike (such as Corinne Preteur, who guided us to this classic French restaurant). My thinly sliced salmon, served on a fresh French loaf accompanying my aubergine soup, was my introduction to France’s heavenly, refreshing lox. The chef’s soups are magnificent, none too heavy but bursting with creative flavors. His desserts are equally divine, with many fruit-based options. It certainly doesn’t have to be, depending on your ordering preferences, but I might declare this one of the lighter meals I had in Paris. 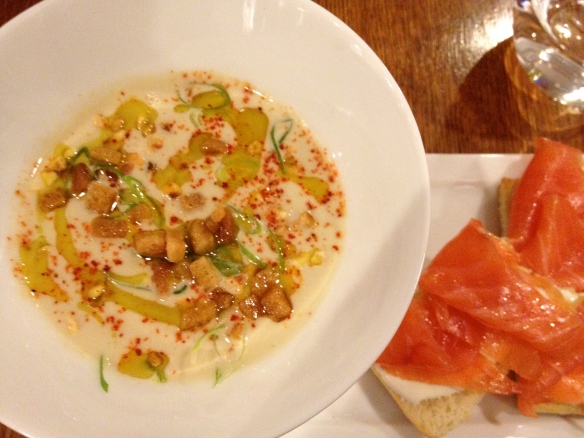 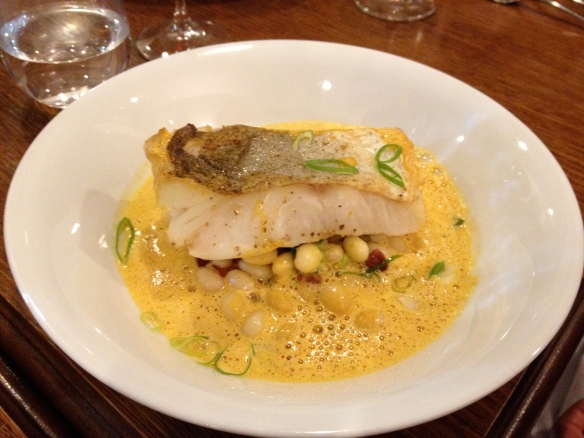